A Long Journey to the Beginning of a Miraculous Recovery

A Letter From Canon Rouquayrol

A Request from Canon Fragelli’s Family

Here is the latest (miraculous) update, as shared by Canon Fragelli's sister, Maria.

Henrique was in the Thoracic Surgery unit for two weeks, where the therapists began to sit him up every day to strengthen his upper body muscles.  In the first days, it was very difficult for him, and his breathing increased.  But over the last ten days, it has grown easier for him to sit for longer periods of time and not feel much discomfort.  As a matter of fact, he told me a couple of days ago that he does not feel the lungs at all, as they feel like his own.  The doctors are still waiting for the lung rejection to occur in order to treat it---but it has not happened thus far, though I'm told that it is normal for it to delay up to three months, and even up to a year.  However, there are some lungs that are not rejected.  Perhaps this Padua lung is one of those! 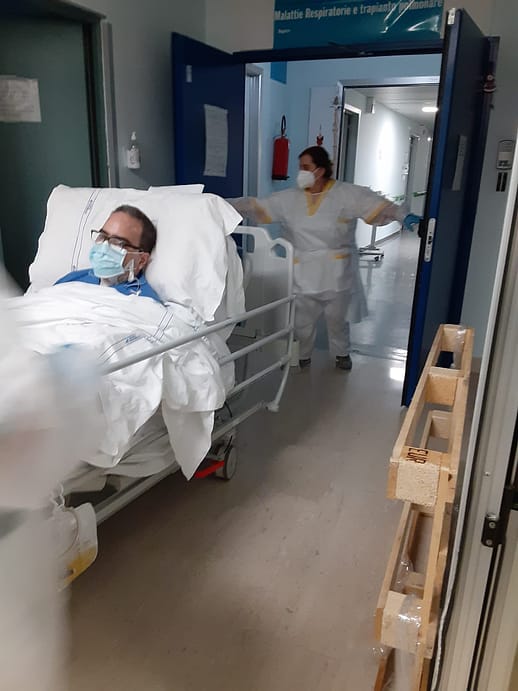 Yesterday, Henrique was transferred to a new and last department in this hospital for him, the Internal Care Unit for lung transplants.  Here, the nurses have a reputation of being much tougher.  They make the patient work hard.  🙂  I saw a sample of this "hard" therapy today,  and Henrique did quite well, elevating his arms above his head by himself without much discomfort.  They are trying to get him to stand, but that is taking longer, as he has a whole railroad of staples across his chest, armpit to armpit, and the long incision is taking time to heal.

Visitation hours continue to be limited to only one relative at a time, so we will be asking for a waiver from the surgeon, Dr. Luzzi, to at least be able to spend Christmas together, my son, Joseph, Henrique, and I.  Even so, we find ways around this rule.  Today, my son snuck in for about a whole hour before they discovered the three of us sitting happily together.  They told him he looked happy, and he said, "Yes, it's because my family is here!"  Let's see what they do with that.  He was also very excited that he was able to feed himself for the first time in six months.  He was a little mortified that a lot of it landed on his pajamas, but who cares, right?

Speaking of "conversing", that is exactly what Henrique has been doing the last four days.  Dr. Luzzi stitched the trachea opening closed four days ago, and since then Henrique's voice has become louder and stronger than before.  He talked non-stop for almost 3 hours today.  : )

As my brother's condition is rapidly improving, the time has come for me to return home.  It has been six months.  Henrique was so sad today because of this, but I have assured him repeatedly that our home will be waiting for him as soon as he is able to walk and lift himself up!  Canon Pozza asked that Henrique be sent to a rehab somewhere in Florence, to be close to the Institute, so they will be sending Henrique to a very good rehab named after a Saint, Don Gnocchi, a priest who founded a hospital for children who were war victims during WW!!  This way he will be able to receive visits from the seminarians and old friends.  I asked Canon Pozza to ensure that my brother is not lacking company.  Henrique can't wait to leave the hospital--it's been sooooo long--but the doctors are being very cautious to not rush the process.  I was hoping to see him established in the rehab before I head home with my son on December, 30th, but it may happen a little later.  We shall see.

I wish all of you a beautiful, blessed, joyous Christmas and New Year!!

P.S. - We would be eternally grateful for your continued prayers for our oldest brother, Antonio, who remains intubated now for two weeks and not recovering.  The doctors want to extubate him, but we cannot turn anything off.  We have not lost all hope--so ask your charity in spiritual help to accept whatever God wills.

Canon Fragelli was sent to Gabon in November 2012 to restore the Mission that had been inactive for several years. Canon Fragelli likes to preach. His favorite subject is the Blessed Mother and Catholic doctrine. He preaches every day at Mass and any occasion that presents itself. “Faith comes through hearing” taught us Saint Paul. His official title today is: “Prior of the Mission Saint Therese of the Infant Jesus and responsible for the apostolate of the Institute of Christ the King in the diocese of Mouila.” He is also the Chaplain of the Prison of Mouila.